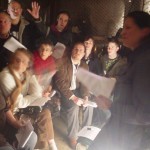 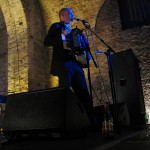 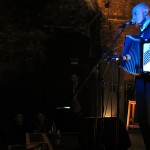 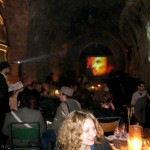 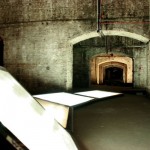 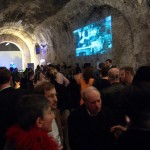 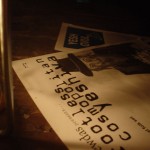 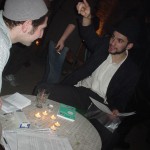 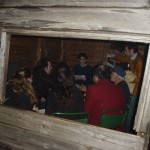 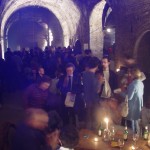 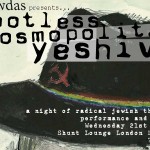 Jewdas’ countercultural revolution rumbled on with the incarnation of the rootless cosmopolitan yeshiva. Deep under London Bridge station, the shunt lounge became a hub of radical and subversive Jewish thought. Something between a salon, a beit midrash and a twisted cabaret club, the yeshiva was filled with those who like their Jewishness iconoclastic, countercultural and provocative. Debate filled the cavernous achways and argument reverberated into the night. Ears strained to hear the details of complex arguments and people mingled from table to table absorbing a dizzying range of ideas. The strains of dark accordion klezmer met those who stayed until the end. Noone left unscathed. Geoff Berner – Vancouver’s legendary Whiskey Rabbi on a mission to bring kelzmer kicking and sreaming into the bars. A Jewish avenging angel jets in with accordion in tow.

Leon Rosselson – Radical folk agitator for over 40 years, writer of the classic “The World Turned Upside Down”

Lennie Lee – Watch out for the screening of Blood Libel which is inspired by the imprisonment of Menahem Mendel Beiles in Minsk in 1913. This film touches the boundaries of morality, taste, religion, political shame, and what might be termed “Unpopular Culture”.

Rabbi Sheila Shulman – ‘Second Wave’ Jewish Feminism: Who were we? What did/do we want? What did we write? What did we do? What are we doing now? Who are we now, or is it over? What would ‘over’ mean? We wanted to ‘change the world.’ Is the job done?

John Rose – Author of “The Myths of Zionism” and iconoclastic left-wing Jewish intellectual, he’ll speak on Liberating Jewish History from its Zionist Stranglehold

Zohar Milchgrub – refusenik and member of Yesh Gvul, speaking on the realities of the occupation and the resistance of the Israeli radical left.

Sue Blackwell – Etymological history of anti-Semitism and anti-Zionism, from a controversial academic famous for promoting an academic boycott of Israeli institutions

Jeremy Schonfield – Between Hatred and Self-hatred; The Passage between Purim and Passover – How does the biblical command to exterminate the Canaanites and occupy their land sit with the equally biblical instruction to love ‘neighbours’ and to obey ‘natural law’?

Natan Meir – A crash-course in East European Jewish radicals, led by lecturer from the Parkes Institute for the Study of Jewish/non-Jewish Relations, University of Southampton

All food and ideas will be certified Kosher by the Jewdas Beth Din. Those who dispute our rulings will be stoned.