A tour of punk Jews

We all like a bit of ‘I didn’t know they were Jewish’ action. It’s irrelevant in every single way to the turning of the Earth and the setting of the sun. But it’s nice to know who else is playing or has played for the team so it can be used as ammunition against any wandering Antisemites/Muslims/Liberals (delete as applicable) who say Jews are rubbish/boring/unhip in case of emergency. I think that’s why we do it anyway.

But this time I’m doing it because I keep discovering new Jewish punks, and I wondered whether they hinted at some underlying rebellious super-talent that we all have inside us that’s lying dormant. Normally other Jewish people make me feel like I was dealt a dodgy hand, but then you find people like this and it’s OK. Let’s take a tour.

There’s something of a bible for Jewish punk out there – Steven Lee Beeber’s Heebie-Jeebie’s at CBGBs, which I read recently. It’s not the world’s best read, trying a bit too hard to ‘explain’ why lots of NY Jews were punks, but it’s a treat for “I didn’t know….” fans. Here’s one of them – Richard Hell:

He’s OK. He’s quite buff isn’t he? A wannabe muscle Jew in the making perhaps. But I’m not a fan of American punk especially, preferring the eccentricity and world-weariness of the first British punks, so let’s move on. If you want more on American punk Jews right up to the present day, then you should probably first check out Jewcy. And those featured on the website for the new Punk Jews film.

But in the UK, first you have to go to Malcolm McLaren. McLaren is very interesting indeed. He’s not a punk who merely happened to be Jewish, he unashamedly looks it, and he brought the mix-and-match wheeler-dealing of the shmatte trade he came from with him when he stitched the uniforms for the first punks. He has a wild eye and he’s a loner. I’m fascinated by this man who, whilst heroined-up nihilists failed to work guitars properly all around him, remained an empire-building workaholic with a flair for style and situationist pointlessness. He’s never reneged on the bored-of-it-all contract with punk, and he’s remained a strange old fellow. Here he is in 1984, being wonderful:

McLaren wasn’t involved socially with the other punk era people, but there seems to have been a little group of them who were on the squat scene together. Starting with Mick Jones of The Clash, who looks like he’s stepped in off a 30s anti-fascist march:

I know he wasn’t 100% Jewish, but he passes for me. He’s cheeky and seems to be having fun all the time. He’s cultivated an unnecessarily cockneyfied voice by this stage in his career, which is lovely.

Mick used to be in The Clash with Keith Levene, who was amazing but a bit mad. He had a birds nest hairdo and a hard stare. He always looks sad. He’s very cool. Here he is being almost silent, but when he does talk, he’s really quite beautiful:

Keith was at the deconstructing end of punk. Like my suggestion for finest Jewish punk lady ever, Vivien Goldman, who had done for Jewish-Black cultural relations than anyone else in the last 30 years. Not to be hyperbolic or anything. Here she is: 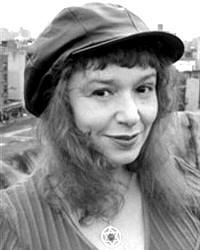 Now she really looks like a troublemaker. But if you want a real Jewish punk shit-stirrer, forget the UK or the US. In fact forget the 70s, he came before then. I give you greatest Jewish romantic nihilist, Serge Gainsbourg…

What a terrifying sight for bourgeois society. He could bring down society with one flick of his pouty Franco-Jewish chops.

3 thoughts on “A tour of punk Jews”