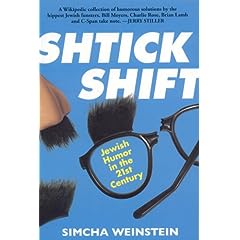 The following article of mine recently appeared on the UK’s leading comedy web page Chortle (www.chortle.co.uk) and will also appear in the next edition of the magazine Jewish Socialist.

It was originally intended to be submitted as a review of a book on Jewish humour that claimed to bring the story of Jewish humour into the 21st century, but as you’ll see it turned into something rather more opinionated:

I hadn’t yet read Simcha Weinstein’s book Shtick Shift: Jewish Humour in the 21st Century but, after reading the review on Chortle, I already felt ill-disposed towards it.

It’s hard to know what to say about a book which claims to bring the story of Jewish humour into the present decade yet doesn’t make a single reference to Israel’s conflict with the Palestinians. It feels like reading about Germany in the Thirties without any mention of you-know-who; a breathtaking omission that I feel Chortle should have pointed out.

If, as Weinstein reminds us, comedy equals tragedy plus time, how long do we have to wait before Jewish humourists start addressing the subject of Israel? If the art of Jewish comedy stems from self-deprecation, where’s the stuff on imprisoning your neighbours, grabbing their land and then blaming them for all the trouble? Weinstein’s assertion that ‘suffering inspires humour which in turn can be used to fight oppression’, would be easier to stomach if he had added that in the 21st century the general audience no longer sees Jews as the oppressed, but is in danger of seeing us as oppressors.

Israel’s apologists have so assiduously peddled the lie that any criticism of the Jewish state is inherently anti-Semitic that the audience is now in jeopardy of believing it. When you relentlessly tell people: if you dislike Israel then you automatically dislike Jews, eventually they are going to turn round and agree with you. This calamitous backfire-in-waiting has to be prevented and today’s generation of Jewish comedians should take up that challenge.

Of course not all Jews are responsible for the mistreatment of Palestinians and plenty of Israelis are openly against the excesses of their own country. But today’s Jewish comedian inhabits an age of ethnicity; publicly debunking your own nation is acceptable but targeting your own racial group isn’t.  If a Jewish comic wants to do some straight talking about Israel he or she finds they cannot: it isn’t their nation and, to criticise it publicly, is perceived (wrongly) as an attack on their own ethnicity.

Weinstein suggests that Jewish humour is alive and well, often citing Larry David and Sarah Silverman as proof. But however popular or successful these two have become, it doesn’t disguise the fact that Jewish comedy is in retreat. David and Silverman may have updated the public’s taste for Jewish people externalising their anxieties, but they both stay well clear of topics like Israel’s ethnic cleansing, its appetite for apartheid, and its penchant for dropping phosphorous bombs on innocent people.

So what do we Jewish comics do? The real story of modern Jewish humour is the way it deals with today’s pain. Sadly, a small number pocket the Zionist shekel by performing at gruesome pro-Israel flag-waving ‘family entertainment’ shows, which now routinely include singing groups from the Israeli army. Most, however, prefer to keep their heads down and follow the path of perceived success, knocking up a workable set of material: a little bit of politics, a little bit of sex and a little bit of Jewish and slide noiselessly into the swamp of value-free comedy that drowns today’s live scene.

As the comedian knows, words are less potent than the silences in between and Jewish people endorse Israel by keeping quiet. With pragmatism the order of the day, the modern Jewish comic either avoids the subject altogether or tailors his or her jokes about Israel to be as uncommitted as possible. The fear of being smeared as self-hating or treacherous by your own community drives the dominant attitude of ‘maybe if I keep quiet, the problem will go away’. Where have we heard that before? I don’t claim to discern what goes on in the souls of others, but surely, cowardice affects entitlement to the accolade of true comedian.

I recognise it’s a lot easier to talk about cowardice in others than to avoid it oneself. For some years I’ve had my own courage tested and I’ve often fallen short. I’ve been writing and developing a comedy show about how I see the Middle East conflict and I’ve often softened material or declined to perform for fear of rejection by fellow Jews. I’ve often retreated myself, distracted by quiet warnings from other Jews to keep my mouth shut.

My name has appeared on a Zionist internet hate list and I often receive mail designed to insult, threaten and provoke. It’s not the vulgarity of these anonymous slanders that unsettles, but the smell of fear beneath them. It seeps up from the sewer of delusion and self-pity that demands forgiveness for Israel’s outrages of today in return for the persecution Jews have suffered in the past; a nauseating insult to Holocaust victims that reduces their annihilation to a matter of political strategy.

I keep going because my own intellectual and emotional discomfort is embarrassingly small when set alongside the actual suffering of the Palestinian people. The ludicrous claim that Zionism makes to represent all Jews, and the widespread perception that all Jews are implicated in Israel’s actions, forces me confront my own cowardly demons and gets me to try and speak through my work against Israel’s disgraceful behaviour.

Over the years, I’ve worked in comedy with some highly talented Jewish comedians. They’re not just funny but also fundamentally decent people who happen to occupy the privileged position of being paid to say what’s in their hearts and minds. So I call upon us all to start doing the job we’re paid to do and take on an unfolding tragedy that claims to be perpetrated in our name. For my part, all I can say is, if you do, you won’t be alone. You’ll be disliked by some fellow Jews, vilified by others and maybe labelled a trouble-maker. But you have not made the trouble, they have.

The compensations are many. You’ll be writing about something that matters and the audience will applaud you for trying to grapple with the truth and how it affects you. You never know, you might even get a mention in Weinstein’s next book. But right now, rather than celebrate Jewish humour, offerings like Weinstein’s suck the life out of it and speed the process by which it is becoming a relic of a bygone age; a comic heritage viewed through an historical prism from a time when Jews were either immigrants or being truly persecuted.

In fairness, provided you can get over the publisher’s warning that ‘no part of this book may be reproduced’, followed by 116 pages of comic material culled from elsewhere and ‘analysis’ we’ve heard countless times before, Weinstein’s book isn’t entirely without merit: For sure, the early stuff rings true. His account of why notoriously anti-Semitic television stations in America eventually allowed Jewish comedy on screen in the Fifties is worth reading and some of his religious baloney is entertaining in a baffling sort of way. But in answer to the question ‘Is this book worth buying?’ Do what the author did, run away.

26 thoughts on “Jewish Comedy in Retreat”